MAKING A WISH FOR A SOON TO BE BEST FRIEND FIGHTING CANCER… Jourdyn I love you.

Jourdyn you are more than ever my Queen and so much more. You conquer all and with the most beautiful smile. Every time I think I have something to complain about I think of you. If I am ever in pain, scared, or hurt I think of you. You have given me more strength than you will ever know and without doing a thing except being my example. Jourdyn I love you and forever will! 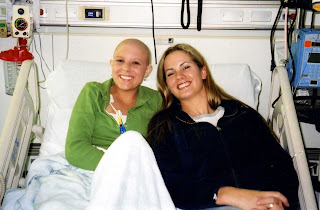 I first heard about Jourdyn, a young girl only 15 years old, from one of my best friends from childhood. Suzy who I grew up next to, and who is one of the most caring, loving persons in the world would only be my “Suzy” as a nurse. She lives to help others everyday. She told me of a girl who she cared for in the hospital who was going through cancer for the second time. She told me that this girl Jourdyn loved MakeUp but hated it at the same time because every time she went for a routine bone marrow transplant, that her immune system was so weak, that she had to throw away any MakeUp that had been opened or used. This left Jourdyn with no MakeUp. I knew there was a small way I could help. I never knew how big of an influence she would have on my entire life.

Jourdyn, after you received a package of MakeUp from me you sent me a letter which
I still have to this day. It said thank you over and over again and also that I was your best friend you just hadn’t met yet. I’m so thankful you were right!

I continued to send packages of products every time I got word about one of Jourdyn’s operations. I enjoyed doing it knowing how she was the envy of every nurse in the hospital. I was so hurt when I received a phone call from nurse Suzy that one of Jourdyn’s good friends had passed away in the hospital and that Jourdyn wasn’t making anymore progress. I had a feeling that Jourdyn was done with the fight. Through her infections, removal of lung and kidney, and chemotherapy burning her from the inside I knew that there was something else I needed to do. I called Jourdyn for the first time. I still remember the pain it took in her voice to even speak to me. I asked her when prom was? She said she wasn’t going. I said that she was and that I was going to be there as her professional MakeUp artist. At the end of the call I didn’t feel the influence that my words had made until a few days later Suzy had called me and told me about Jourdyn. Everyone at the hospital especially Suzy was amazed at the excitement they saw in her eyes to get better. I remember Suzy asking me, “What did you say to her?”

I lived each day at that time to find ways to help sweet Jourdyn. I started getting my celebrity clients involved. Anytime one would come in and shop with me or get their MakeUp done by me I would ask them to sign a card for Jourdyn. Hilary Duff, Tara Reid, Kelly Osbourne all got involved but I was most impressed with Kelly. She not only signed the most beautiful letter to Jourdyn but gave me permission to give her cell number to her. She really wanted to know how she was doing. At that moment, with all that Kelly was going through in her personal life, she still remembered what her mother had gone through, what she felt like, and she reached out much more than any other celebrity! Kelly I forever love you! Sorry I told you that rehab was for quitters!!! I am so proud of you. Your mom hit me for that one at the Ivy! 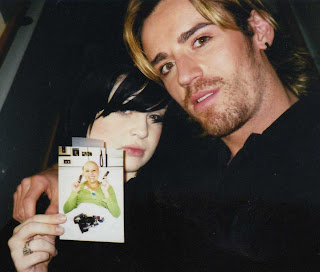 With a lot of pain and a lot of love Jourdyn continued to get better. I marveled at her attitude and her ability to be one of the happiest teenagers ever. I started to get my entire store involved with her look for prom. We all made face charts and sent them to her letting her pick her favorite. I love all my Artists I worked with that helped on my end with Jourdyn’s battle! 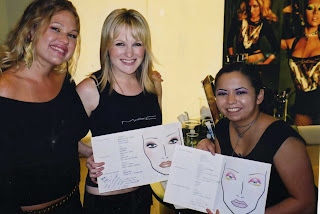 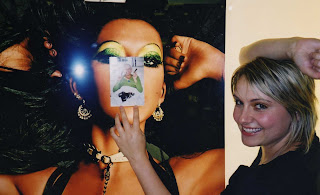 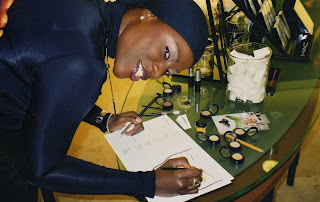 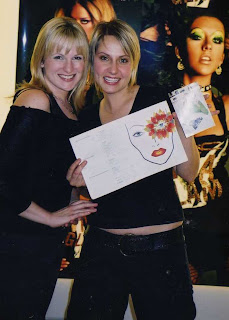 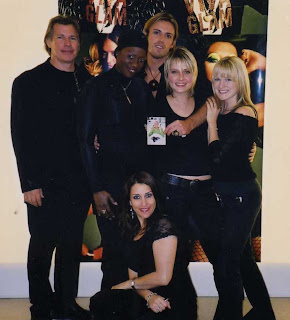 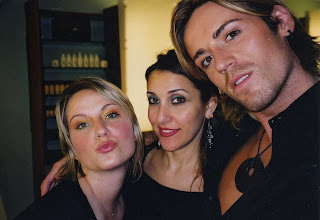 It was a few weeks until Prom and I was so excited to not only meet Jourdyn for the first time but also to find out about her cancer. At this time at work a MakeUp artist and now good friend Gina Brooke would come in store to shop. I loved talking with her and learning from her. She was just signed as Madonna’s MakeUp artist. A dream of mine to work with Madonna. Gina asked if I would come assist her on a Music Video… She also mentioned how it would lead to going on tour with Madonna.  I smiled deep inside cause even before she told me when it was I knew the answer was I can’t. The Music Video test was the same weekend as Prom. I still remember Gina’s teared up eyes as she told me I wasn’t like most MakeUp artists. I knew she was right and was glad she was right!

I flew to Salt Lake City, picked up my sweet mom, and drove 3 hours south to Cedar City Utah. When I hugged Jourdyn for the first time it didn’t feel like the first. I have always know her. She lived somehow in me. Her strength was in me, her beauty, her love. The energy in the application was victoriously overwhelming and I was thankful to have my mom there to help me out! 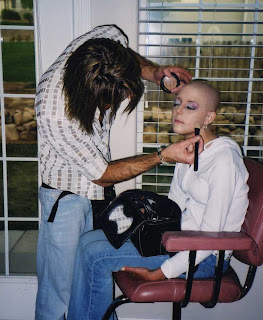 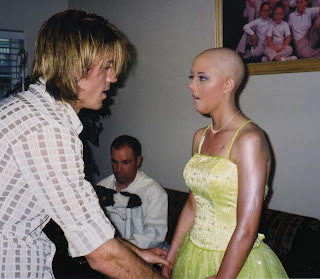 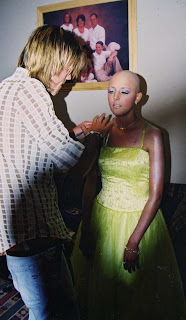 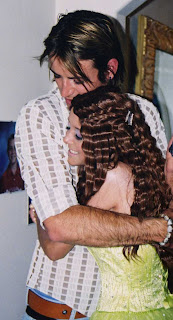 best hug ever from the prom queen
﻿The paper came out later that week with this article. I want to thank first Jourdyn for your strength, opportunity, and your teaching me. Second Suzy for making these moments possible and for helping me relize the potential in every opportunity. Third my MAC Pro team artists and celebrities that helped power the adventure and last my mom, for raising me to be the way I am. I can’t help it most the time! 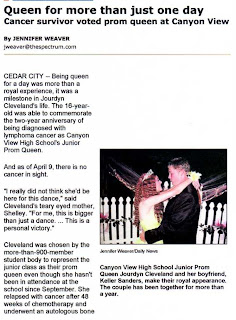 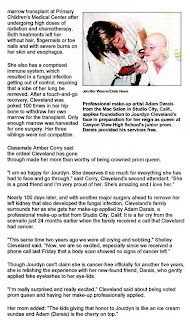 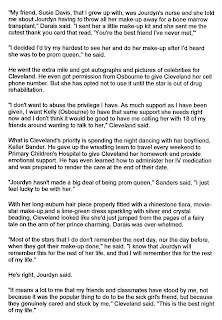 Less than a year after Prom Jourdyn was diagnosed for the third time with cancer. She still… to this day…  is winning her fight… with treatment!  To my best friend I have finally met! Thanks for coming to my family reunion with me and I hope I don’t ever let someone as strong as you down!