Oscars are next weekend and I’ll be busy for 3 days. Last year was amazing with the pre pre party with a concert by James Taylor and Carol King, the night before party at The Beverly Hills Hotel, the viewing party with Hayden Panettiere, and my favorite part of the day was watching the Oscar’s eating lasagna at Sarah Silvermans house before doing her makeup for an after party. Ask me about the iron/poker table story sometime!!! Or I will write about it when I get caught up to 2010!
In the meantime… back to Oscars 2006 I was able to work on Rosie from
BRITISH GLAMOUR!!! It was nearing the end of my time with MAC Cosmetics and I’m Glad that Rosie Chose me to give her what I called a “Fantasy Glam” Red Carpet Look. I think that She had a big crush on Rod Stewart and wanted to get some stories about him out of me… Maybe not though!

Here’s the story in GLAMOUR!!! 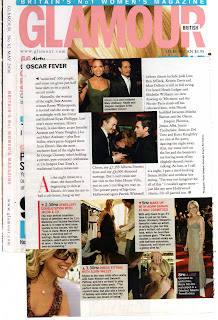